Party to a Crime

It's a silhouette behind a blur of a love we used to share.
Burning bright, feeling hot, as we rode flames into passions and desires.
A fire is riding the waves, waves raining from the sky. Fire and
Water, we are blended.
Framed in a picture, trapped by closed windows, both longing
for air as we breathe out pheromone embers.
Swept off my feet by a Knight in shining armor.
Dance to be remembered as we twirl and twirl until dusk.
Tap dancing to invisible drums, a rhythm of love on earth's
wooden floor.
But she is always watching.

Standing there on the hinges of a glance, a transcendent.
He doesn't see her, but I do. A shadow of a woman draped in a blood-colored gown.
A visitor from Hades, trapped in-between a dream and sleep's unrest.
She has no face; I see no eyes, but I know she's always staring.
So angry but never says a word.
Just standing there, but I know she's pissed as if I stole her reality.
Who is she, this enchantress? 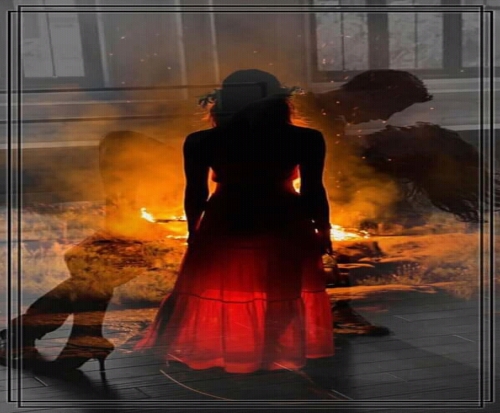 He told me it was only that one time. And the woman he did not love. But these memories keep haunting me. That night I caught them both.
I thought we were happy then, as we danced this life away. So why did he have to interrupt my glow with his games that hurt me so?
We could recover; things have been great since then.
A year had passed, we got through what's hard, but never will
I forget the show. Again and again, it bares its head, a channel that's stuck in time, in my mind. Forgive him I did, but my heart won't let it go.
He had told me that she was the one who pursued, seduced him into a place forbidden.
He tried to fight temptation but failed, as she rode him into fantasies unhatched that belonged to only me, his wife.

But in our home John? Why of all places in our bed? I couldn't believe him.
When I walked in on them, he pushed her off his charlie horse as she tumbled back, hitting her head.
It happened all at once that night, a dream that keeps rewinding; as she's floating down on the dresser's edge, an invisible bullet would soon claim her life.
Staring into my eyes, knowing that she had just bested me, a smirk on her face.
"Crack!”
Her head impacts the table, from which she'll never awaken.
We had to hide the body before the neighbors knew.
A secret that we both must bury, a secret we shall take to our grave.

The news called it a mystery; she disappeared without a trace.
To this day, she's never been found.
To this day, our secret diary lies beneath the ground.
But I know it's her, coming back to haunt us, to remind me of that time she laid with my man.
I hated her then, but now, that hate has turned to both fright and sorrow.
Because right there on the twinges of my conscience, right here she now stands.
She approaches us, legs unmoving, closer and closer as we dance.
He still does not see her. But I do.
It's a silhouette behind a blur of a love they used to share.

(To be continued in the 'Visions of Poetry Series.')