"Her deep passion for the written word and and her desire to bring laughter to the hearts of her readers, reflect in her own writings." From a very young age Hazel-Ann Lynch understood that all she needed to transport herself into a world of magic, intrigue and pure bliss was a good book. Each word that pops out of the pages of any book is her passport to gain entrance to the entire world. Every perfectly crafted character famous or infamous comes alive in her own universe.

"I was at a function in Brooklyn NY at Grand Army Library, which is the biggest library in Brooklyn celebrating my first published piece in an anthology with fellow writers/authors. When a fellow writer by the name of Bryce told me his pseudonym which was Senor Fluffy. I was so excited with joy because something about that name made me instantly think of a story about a cat. I then told Bryce I was taking his alias to write my Senor Fluffy series which he gave me his blessings to. And this is how Senor Fluffy was born. I would like to say a big thank you and acknowledge some friends and family members who played a big part in listening, motivating, and encouraging me along my journey of writing Senor Fluffy. These wonderful people are: Dennis Wah, Annette Phillip, Tiffany English, Saskia Moore, Decclon Lynch, Carlita Ellis, Valarie, Fatima Lisbeth, Verrol Ellis, Toni Lexus, Sandee, Khadija Gibbings and Hiba Asmer. The library staff and Librarians at Flatbush Library on Linden Avenue Brooklyn. There are so many more of you that I constantly talked about with my love for writing, even though are not on paper you are all in my heart..."

Her deep passion for the written word and and her desire to bring laughter to the hearts of her readers, reflect in her own writings. Hazel-Ann Lynch has no special genre as she does not like to be fitted in any specific box, much like her character Senor Fluffy. 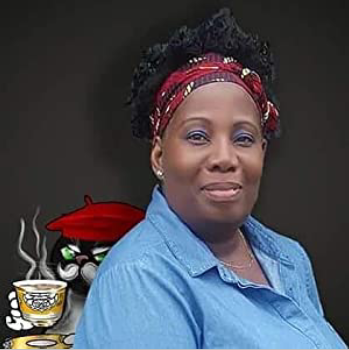 Hazel-Ann goes where the wind takes her whenever she puts pen to paper. She has over 75 snail mail pen-pals worldwide, having started corresponding at the age of 12. Among her pen-pals are people who are incarcerated as she believes that everyone needs at least one friend. Hazel-Ann boast of being the mother to a handsome grown son name Alirio and 'Glam-ma' to Azariah and che.

I laughed so hard at the adventures of Senor Fluffy and Madame Du Bois, but even more at Fluffy's friends: a Jamaican Rastafarian cat called Marley; a parrot called Esmeralda who can cook mean Trini street food; a library- card carrying rat called Reena, and so many more. Tears! - ROSLYN CARRINGTON, Writer and Editor.

Senor Fluffy - A Cat's Tale is a delightful read, Hazel-Ann Lynch has done an excellent job developing each of her characters. You find yourself relating to each one in some way with their human-like qualities. Especially the protagonist Senor Fluffy; you cannot help but fall in love with him and his adventures. This book will have you laughing and wanting to read more! - CANDICE MCGREGOR, Illustrator/Graphic Designer/Owner of Pandalific Graphic Design Studio.

Senor Fluffy - A Cat's Tale is hilariously gut punch funny! A twist I didn't see coming. Intricate attention to detail, showcases the characters in the book. Another side of the author I never knew. Love the illustrations which brings the reader's imagination to life. - VEE NELLY, Author & Writer/Owner of KVI Network Creations.

Vee is a poet and writer by heart from the West Indies. He has published several series of books. To name a few, "Visions of Prosetry, A King's Fall & Dark Haze."...